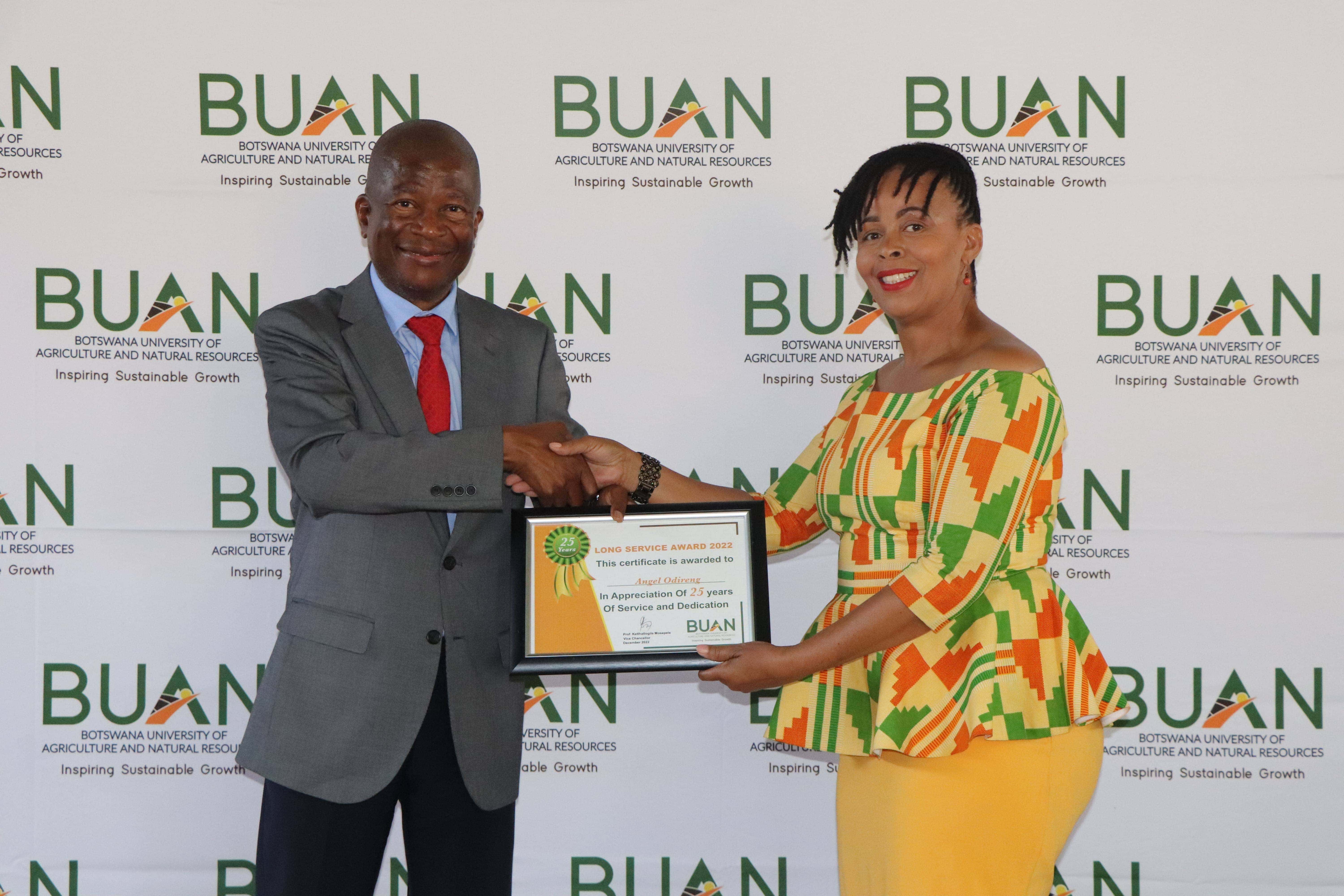 After two years of no celebrations of staff achievements due to Covid-19 pandemic, BUAN finally held the staff long services awards on the 8th December 2022 with the theme – ‘Inspired to Reach Great Milestone’. The ceremony was to celebrate [MS1] 59 employees who have been working and contributing enormously to the institution and the categories were over 5-year span from 10 to 40 years of service.

In his opening remarks, the Vice Chancellor Prof Ketlhatlogile Mosepele, welcomed all stakeholders for gracing the event to recognize and celebrate staff milestones. He also extended his gratitude to the University Council leadership who were present for their gesture and leadership. He also recognized and appreciated the presence of special guests, who during the year made the University proud by rising up the Academic ladder as Professors and Senior Lectures. “You are not here by default, but because we salute you for outstanding performance, hence it is befitting for you to be celebrated as well”, Prof Mosepele said.  He went on to state that he was privileged to recognize the presence of the awardees, who’s loyalty, achievements and milestones where celebrated and applaud them for great work ethics and good conduct. “It is undoubtedly your service and good conduct that has seen you through the years in the University”, he explained.  He encouraged all to create the future for this University as well as the Nation together citing John Schaar- a futurist- “The future is not some place we are going, but one we are creating. The paths are not to be found but made. And the activity of making them changes both the maker and the destination.”

The Guest speaker was the Chairman of BUAN Council Mr Neo D Moroka. He stated that he was excited and honoured to have been invited together with his fellow Council Members tor one of BUAN’s flagship events, the Long Service Awards Ceremony. On receiving this invite – I paused to reflect on what would resonate with you on your momentous day – a milestone. I then asked myself – what does to be honoured for long service mean – both to recipients and the University – there I found the cue to my address this afternoon”, he said.  He explained that a long service award is a means of recognising and rewarding an employee’s loyalty. He further noted that the occasion was special and momentous as it is not often that the opportunity arises to publicly thank staff for the many years of dedicated selfless service that they have devoted to the institution. The ceremony is therefore a chance for the University to publicly acknowledge the awardees’ loyalty, commitment, dedication, and a strong sense of belonging over these years. “The University really appreciates your loyalty in all respects because this is an era where job hopping has become the trend, as our skilled personnel continually search for better opportunities and new experiences and as such staff seldom stay longer than even up to five years”, Mr Moroka related.

The Chairman stated that a survey conducted a few years ago, which the Human Resources practitioners can reflect better on, found that an average person could expect to have more than ten (10) jobs over the course of his/her working live. This outcome when compared to BUAN’s years of service celebrated just fizzles into oblivion. Today here, we are witnessing a combined total of 1090 years of service from fifty-nine (59) recipients. Amongst the group, some members of staff will be receiving certificates marking more than 3 (three) decades of loyal service to this institution; a period spanning over three critical stages of institutional transformation towards becoming the University. This year’s theme, of “Inspired to Reach Great Milestone,” underlines the importance of these awards. The transformation journey marked a milestone that is in tandem with today’s recipients. The University values the awardees as part of a journey to search and achieve milestones to reach greater hights. BUAN is extremely fortunate to have staff members whose many years of dedication, commitment and loyalty have earned the much respect the University is enjoying today. It is now time to return that loyalty. In his conclusion, the Chairman, implored all the recipients, to place the invaluable expertise and experience into mentoring up-and-coming employees, so that they too can one day make a similar contribution to the University. “We salute you for being loyal employees of BUAN. Congratulations once again on this career milestone and we look forward to meeting you again at your next long service awards ceremony in a few years’ time. Let me take this opportunity to also wish all of you a safe, prosperous and a happy new year.” Mr Moroka said.

The representative for Awardees, Prof Cecil Patrick, who received a silver jubilee award, gave a captivating speech. He said that he was very honoured to represent the awardees of many years of service from the era of BAC, BCA and now BUAN. He stated that the majority of awardees have spent their entire productive life in BUAN and have contributed significantly in shaping/ changing the outlook of the institution. He had a chance to have a chat with some of the awardees who expressed their dissatisfaction as they felt the token of appreciation was small for the occasion. He advised that in future, staff should be involved in the planning of the event for their input to be considered. He urged management to put staff first, as a motivated and happy employees will take care of clients and result in improved productivity. He also advised that all employees should be treated fairly and engaged f to ensure alignment and compliance. To the awardees, Prof Patrick encouraged them to be dedicated and committed to motivate others.

The Deputy Vice Chancellor, Academics Affairs and Research, Prof Shalaulani Nsoso thanked all stakeholders for gracing the ceremony and wished all a joyful and safe festive season!! 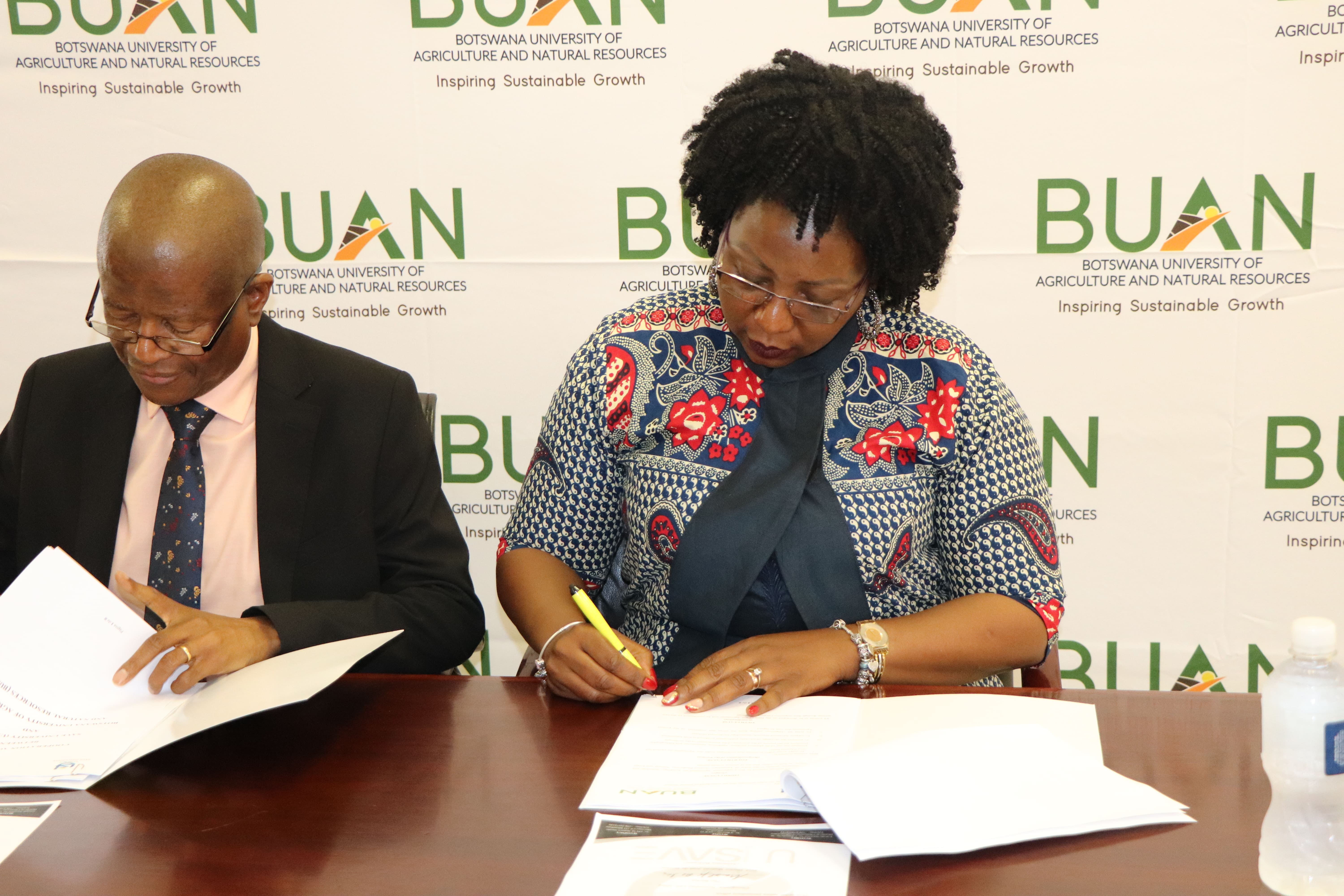 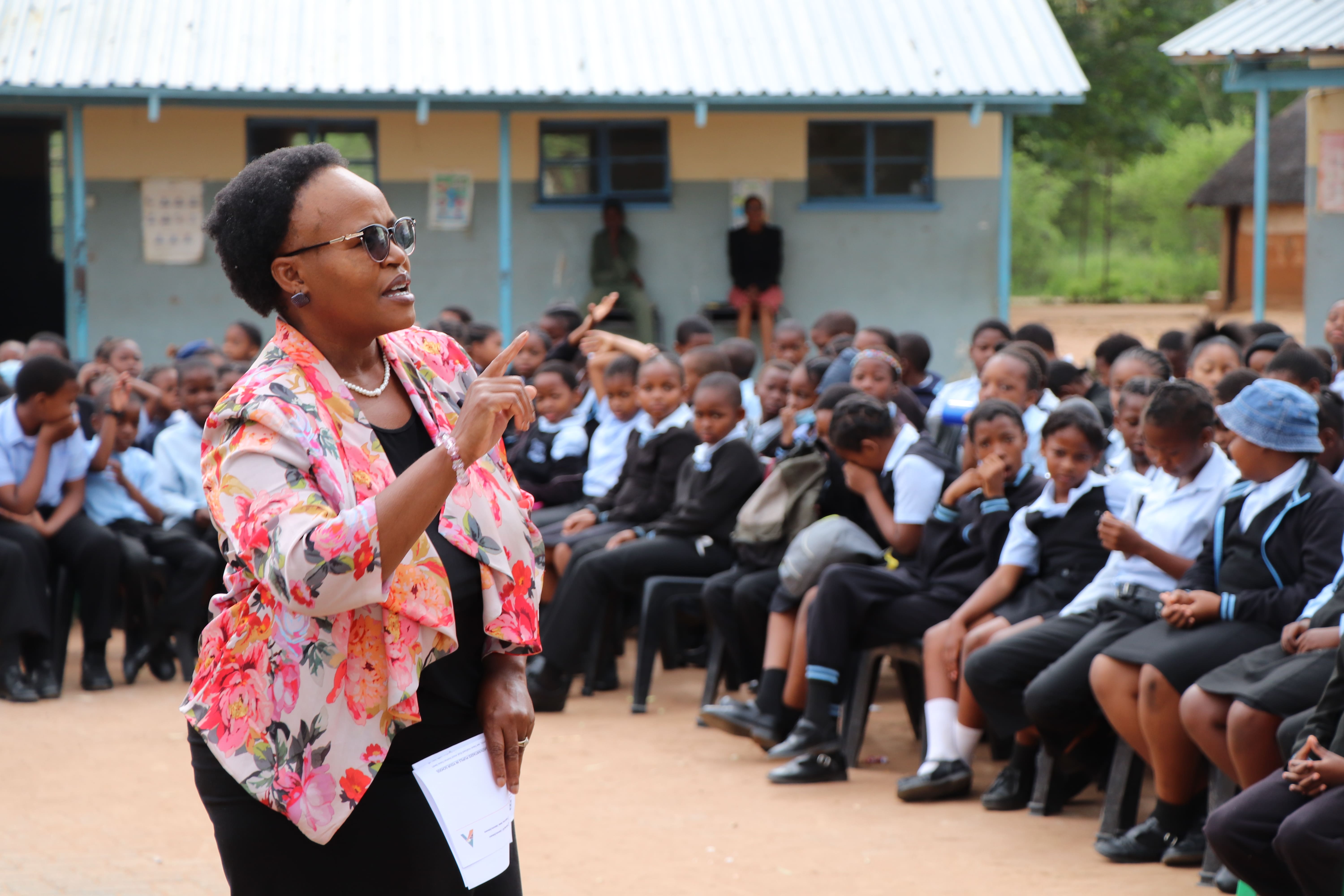